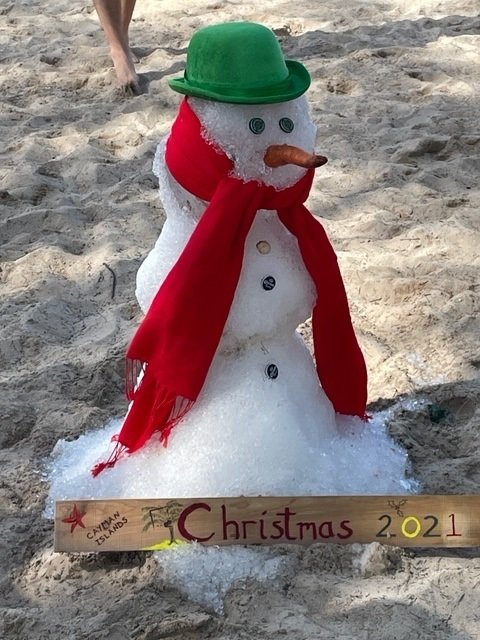 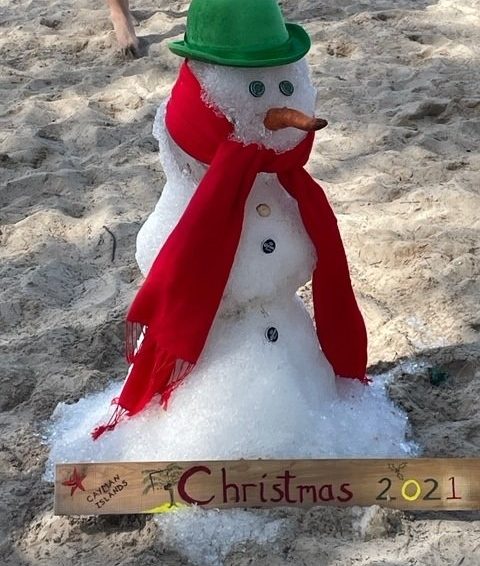 Snow joke: Look what showed up on Seven Mile Beach for Christmas

3 weeks ago·2 min read
ShareTweetPinShare
Home
Local News
Cayman Islands
Snow joke: Look what showed up on Seven Mile Beach for Christmas
The content originally appeared on: Cayman Compass
Do you want to build a snowman? Two friends decided to do just that on Seven Mile Beach on Christmas Day.

Snowmen are common sights over the festive season in colder climes than Cayman’s, but visitors to Seven Mile Beach on Christmas Day were treated to a rare appearance by a Caribbean snowman.

Friends Jenessa Danielson and Tom Dwyer built the snowman from ice, to bring a little wintry and cheery atmosphere to the sun-soaked beach.

This was the second year they’ve made a beach snowman – last year, they made a similar, though smaller, one on West Bay’s Cemetery Beach, but lugging the ice from the road to the beach was difficult, Dwyer said, so this year, they opted for Governor’s Beach, with its easier access.

“The snowman was a hit,” Dwyer said. “People were queuing up to take photos with it.”

But there were a few trials and tribulations along the way, he admitted. When he went to check the freezer at work where he was freezing the large ice balls that were used for the foundation of the head and body, he found the freezer door had been left slightly ajar.

“They were kind of melting,” he said, “but were frozen enough for me to make it.”

Then, he got a call from Danielson who was making the ice shavings – the ‘snow’. She broke the bad new that the ice shaver wasn’t working. But, they got it working again after half an hour, and “it all came together in the end,” Dwyer said.

Dwyer recalled, “My friend said, ‘Let’s build a snowman instead.’ I said, ‘Sure’, but I thought she was joking.”

Before long, plans were afoot for making a snowman that would withstand, for a while at least, a December day in sunny Cayman when temperatures in the afternoon are in the mid-80s. It involved freezing large balls of ice, stacking them on top of each other, and covering them with ice shavings – and adding a carrot nose, scarf and hat, of course.

Their snowman this year was about three feet tall. The year before, it was smaller, but lasted longer because the slightly ajar freezer door this year meant the ice ball for the snowman’s head was not solid.

“The head wasn’t frozen though. It was only frozen about an inch. When I was drilling the holes… the water came out,” Dwyer said.

Analysis: Waiting for the COVID-19 tide to turn

“He melted after about 45 minutes this year,” he added. Last year’s snowman survived about three hours.

But not only did was Governor’s Beach the site of a Caribbean snowman, it was also the battleground in what was, almost certainly, Cayman’s only snowball fight on Christmas Day.

“My friend made plenty of ice shavings which allowed for snowball fights with the kids,” Dwyer said.