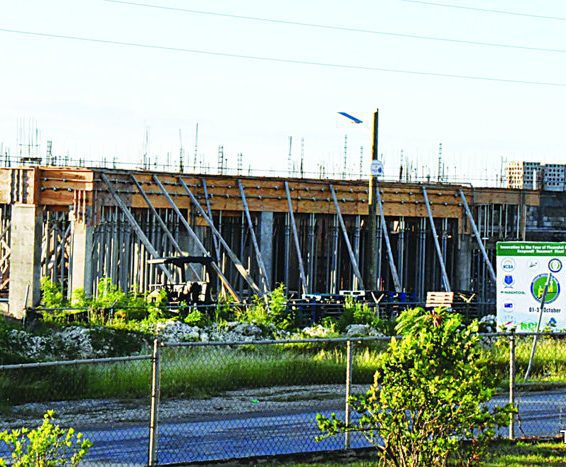 The FBO Terminal under construction

The US six-million-dollar FBO Terminal, a project of Lloyd’s Aviation Services, is making steady construction progress just north of the middle section of the Clayton J. Lloyd International Airport.
The roof area of the first floor has virtually been completed giving way to the start of the second floor of the PBO. The term Fixed-Base Operator refers to an organisation such as Lloyd’s Aviation Services. The FBO has been granted permission to operate and provide support aeronautical services including fuelling, tie-down, parking of aircraft and passenger handling. The CEO of Lloyd’s Aviation Services is Mr. David Lloyd, a qualified commercial aircraft pilot with Airline Transport Pilot Rating. He has been the Fixed-based Operator in Anguilla since 2004.

Lloyd’s Aviation Services office handles private executive jets flying to Anguilla from the United States, Europe, UK and other countries. The jets started coming to Anguilla around 1985, attracting much excitement among the citizenry; boosting tourism; and bringing the rich and the famous to the island. The FBO in Anguilla will also serve passengers transiting to St. Barths.

Commenting recently on his coming travel facility, Mr. Lloyd told The Anguillian newspaper: “This is going to be the new FBO Terminal, a facility to accommodate incoming and outgoing corporate jet passengers. It will have TSA-approved Customs and Immigration facilities to make the entry and departure process a lot smoother and easier.

“When you are catering for that kind of clientele, they are accustomed to facilities like this. We are therefore positioning ourselves to the same level of service that is expected of first-class FBO companies.”

The first floor of the two-storey FBO Terminal will include accommodation for Customs and Immigration; catering and storage services; the front desk and security. The second floor will be for administrative purposes including ground-handling; clearance; flight-planning and an additional passenger lounge.

At the speed at which the construction work is progressing, the FBO Terminal should not take long to be completed. “Probably it may be mid-next year,” Lloyd said in June 2021. “But it may be before that, and this would give me a little flexibility. However, we will have a significant part of the project completed by the end of this year.”

The office of Lloyd’s Aviation Services is located at one of the counters at the Clayton J. Lloyd International Airport for the time being.