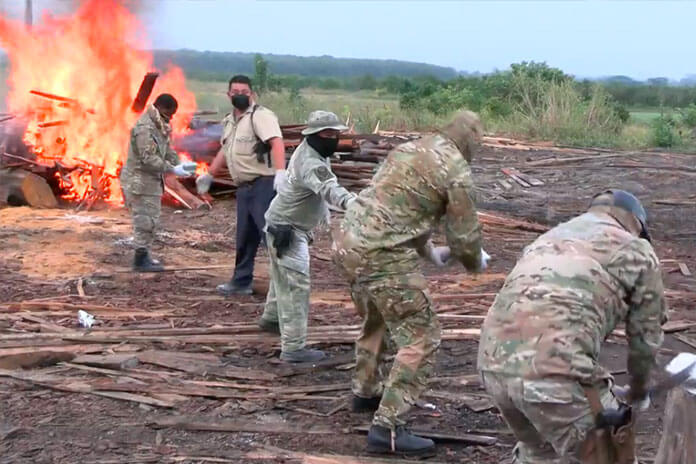 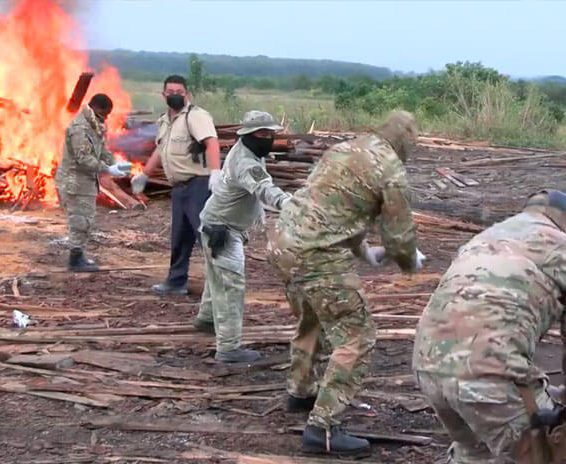 Hidden Valley coke up in smoke

BELIZE CITY, Thurs. Dec. 9, 2021- Early this morning, the Belize Police Department escorted a caravan transporting the 1,277 pounds of cocaine, found by police after a drug plane landing in the Hidden Valley area of Mountain Pine Ridge, for destruction at an undisclosed location. At the start of this week, seven men were charged for the importation of the drugs. Today, the drugs were incinerated as key law enforcement personnel looked on.

Assistant Commissioner of Police Alford Grinage told local media in a briefing today that all the drugs were destroyed in the presence of a Justice of the Peace, a magistrate, personnel from the Scenes of Crime Unit, and a senior officer from the Prosecution Branch. Samples to verify the nature of the substance were also taken.

At this time, police are unable to determine a street value for the drugs destroyed in this recent operation.

ACP Grinage said that while the bust is only a small dent in the drug world, it was significant for the department, to prove to the public they had evidence to charge the 6 men found in the area on the night of the landing and to prevent this payload of drugs from entering the market for human consumption.

While the department was finalizing plans to destroy this cocaine cargo, another drug plane was being monitored last night. It is said to have gone into Guatemala, but ACP Grinage confirmed that it hovered over Belmopan before exiting our airspace.

If this was a message to Belizean authorities from the narcos, ACP Grinage told local reporters that it is one to which they are ready to respond with decisive action.

He also indicated, however, that another task to be undertaken by the Police Department is its enforcement of high standards among its personnel, given their special role in the security service. While he pointed to the responsibility of individual officers to prevent narco personnel from infiltrating the department, he made no statement on steps being taken by the Police

Department to weed out such persons.

He noted, however, that he is sure that the cartels and drug dealers need the assistance of personnel from the various security services to carry out their narco activities within the country.

For now, ACP Grinage believes, like the Prime Minister, that an upgrade to surveillance gear such as a radar would play a huge role in the fight against narco-trafficking in Belize.