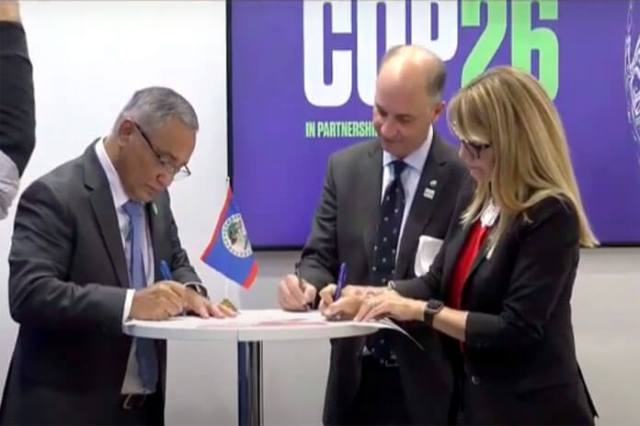 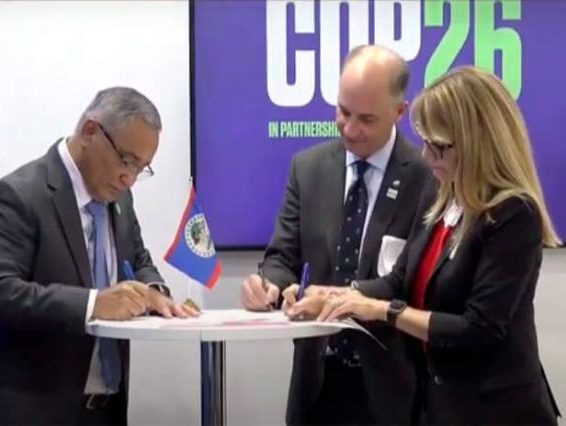 BELIZE CITY, Thurs. Nov. 4, 2021 — Earlier this week, Prime Minister Hon. John Briceno, on behalf of the Government of Belize, entered into an agreement with the World Wildlife Fund (WWF) and the Nature Conservancy (TNC) that secures permanent funding for the country’s marine protected areas. He signed a Memorandum of Understanding with these two entities at a side event in Glasglow, Scotland, at the COP26 Summit.

The deal falls under the Project Finance for Permanence (PFP) initiative, which is a brainchild of the WWF, and is expected to ensure the protection of up to 30% of our oceans by 2025. During his remarks at the event, also streamed live, PM Briceno commented, “it is certainly quite exciting. I said earlier that by signing this MOU with two of the largest NGOs in the world of conservation, it certainly will help us to be able to ensure that we keep up to our commitments. Many instances, individuals, and companies, and governments, I did not want to start with governments, sign on to agreements and agree to certain things and they don’t.”

The PM said that the financing provided through the agreement will furnish the country with the funding necessary to fulfill its commitments, and he also expressed his hope that the signing of the the MOU will ensure that the signatories, including the government of Belize, live up to their commitments.

“The MOU is also tied to the announcement on setting up of the PFP that will be used to finance a lot of the marine conservation work that we are doing and need to continue to do in Belize. So, certainly for me as the Prime Minister, it is a privilege and honor to sign on behalf of the people of Belize,” PM Briceno said.

He commented on the strides taken by the country to become a world leader on the conservation front and pointed out that more than 30% of our lands are already under some form of protection. He hopes to have 30% of our oceans under protection by 2026 and says the financing coming from the PFP partners will aid the country in achieving this goal.

“With this agreement, we expect that by 2026 we will have thirty percent of our oceans under some sort of protection. But, what is important with what we are doing today, is that this gives us now the opportunity not only to have what you call paper reserves, but the PFP gives an opportunity to countries, especially small countries like ours that has difficulties accessing funding, to be able to ensure that we can have funding in permanence, as what PFP stands for. For us in Belize, we are very excited about it,” PM Briceno said.

The CEO of the Nature Conservancy, Jennifer Morris, said that it is their duty, along with the donor community, to provide support to and move partners closer to realizing their conservation goals.

“At the end of the day, if his government doesn’t have the budget or the communities on the ground don’t have the incentives and monies they need to conserve, it is all platitudes. So that is our goal, to make sure that you all have the resources you need,” Morris stated.