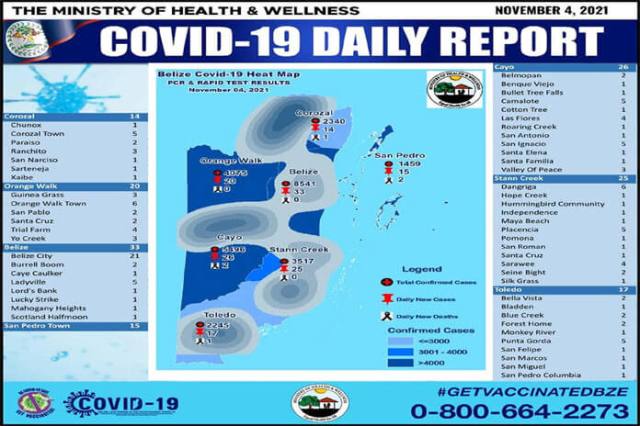 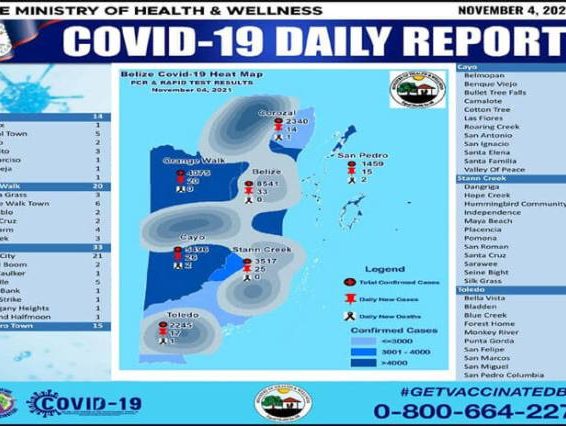 BELIZE CITY, Thurs. Nov. 4, 2021 — The daily number of newly detected COVID-19 cases remains in the triple digits, resulting in a positivity rate that for weeks now has not fallen under 10%. This is indicative of a third wave of the virus that has still not subsided in the country. Vaccinations are also lagging behind, with only 206,652 persons in the country having received at least 1 dose of a COVID-19 vaccine despite widespread availability within the country. Today, the United States government donated a second batch of over 100,000 COVID-19 Pfizer vaccines to further bolster that availability.

The vaccination report from November 3, 2021 records 183,897 persons as being fully vaccinated, and, as mentioned, 206,652 persons with their first dose. Just this week, the FDA issued emergency authorization for administration of the Pfizer vaccines to children between the ages of 5 and 11. These doses come in smaller quantities with of, course, smaller needles suited for children. Today, we reached out to the US Embassy and Ministry of Health and Wellness to verify if there were any of these jabs especially calibrated for kids among the newly donated vaccines but received no reply.

As of today, November 4, 2021, a total of 2,304 active cases of the virus are recorded across the country. A total of 37 persons are hospitalized today, with 17 needing intensive care. To date, 505 fatalities have been recorded since the start of the pandemic.

Today, 1,469 new tests were processed and 150 new cases were found. A total of 180 recoveries were logged and 6 deaths were recorded. Three men and three women, five unvaccinated and one with two doses. Two of the persons are from Cayo and San Pedro respectively, one was recorded in Toledo and another in Corozal. The positivity rate for today was 10.4%.

On November 3, a total of 1,660 new tests were processed and 218 new cases were identified. Approximately 203 recoveries were recorded and fortunately, no new death occurred.

Earlier this week, on Tuesday, however, 4 COVID-19-related fatalities were recorded — 3 men and 1 woman. Two of the persons were unvaccinated, and one had received two doses of the vaccine. The persons who died were from Belize, Orange Walk, San Pedro, and Toledo respectively. On that day, a total of 1,469 new tests were processed and 150 cases confirmed. A total of 227 recoveries were recorded.

According to the three-day report, for the period from Saturday, October 30, to Monday, Nov. 1, a total of 3,339 tests were processed and 351 confirmed cases were found. Around 514 persons recovered from the virus and again, 4 new deaths were logged — this time, two men and two women, and again two of the persons were unvaccinated, and one had received two doses of the vaccine. Two of the victims were from Stann Creek, 1 from Cayo and 1 from Corozal.