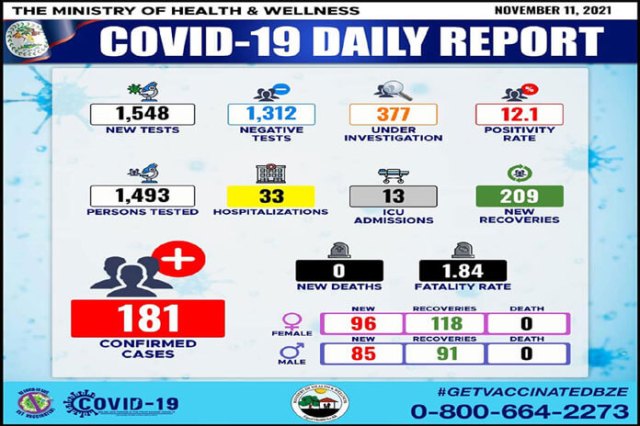 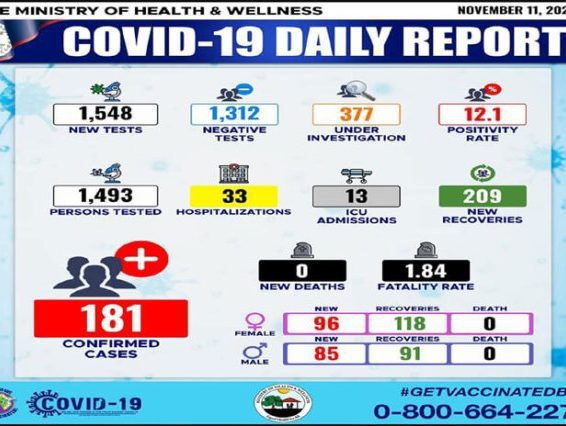 BELIZE CITY, Thurs. Nov. 11, 2021 — In an interview yesterday, Minister of Health and Wellness, Hon. Michel Chebat announced that COVID-19 booster shots have been rolled out for all citizens over the age of 18. Initially, these additional COVID-19 vaccine shots, now being administered in other countries across the globe, was approved in Belize for persons over the age of 60 and those living with co-morbidities. Just this week, Pfizer, the producer of one of the vaccines, asked the US Food and Drug Administration for approval of the booster shots for all American citizens. That approval has not yet been given, but in Belize, the rollout of booster shots is a go.

In addition to this, a reduction of the weekend curfew period has been announced. Starting November 22, the curfew time on Friday and Saturday nights will start at 11:00 p.m. and end at 4:00 a.m., while the nightly curfew period from Sundays to Thursdays will continue to be from 10:00 p.m. to 4:00 a.m. While this relaxation comes at the height of the third wave of the pandemic in the country and at a point when the number of cases and deaths are at a peak for 2021, Minister Chebat says that this decision is a balancing act, to slightly reopen the economy in time for the high season in tourism.

Recent vaccination numbers show that 207,208 persons have received least 1 jab of the vaccine in the country. Of that number, 187,089 persons have received two doses, and 20,119 have gotten 1 dose. This accounts for almost half of the population in Belize, still far from the needed 70% plus required for herd immunity. While more children 12 years and older are being given vaccinations, those in the 5-11 category are yet to begin the process, since those vaccines designated for that age group are not yet in the country.

A total of 2,021 active cases of the virus are within the country today, November 11, 2021. Approximately 26,163 persons have been marked as recovered since the start of the pandemic, and today 33 remain hospitalized, with 13 needing intensive care. A total of 530 deaths have been recorded since the start of the pandemic; this is after a spike this week, with a double-digit number of fatalities being recorded on two days

Of the 1,548 tests processed today, 181 new cases were found. Also, 209 persons were declared to be cleared of the virus today, and no additional deaths were recorded.

On Wednesday, November 10, a total of 167 new cases were identified from the 1,703 tests processed by the MOHW, and a total of 222 recoveries were logged. On that day, 11 persons died as a result of COVID-19 — 4 women, and 7 men. Three of them were from the Belize district, three from Stann Creek, and three from Toledo, while 1 person died in the Orange Walk District and San Pedro respectively. Six of these persons were unvaccinated, 3 had received 1 vaccine dose and 2 were fully vaccinated. The day’s positivity rate was 9.87%

On November 9, a total of 1,840 new tests were processed and 239 new cases were identified. On that day, a double-digit number of deaths was also recorded — 4 men and 6 women, 10 in total. Two were from Orange Walk, Cayo, and San Pedro respectively; 3 were from the Belize District and 1 from the Stann Creek District. Six persons were unvaccinated, 2 had received 1 vaccine dose and 2 had received 2 doses. A total of 221 recoveries were recorded on that day.

In the three-day report, released on Monday, November 8, the Ministry recorded 3,083 tests and 268 new cases over that period. A total of 448 persons were marked as recovered and no new death was logged.
And on Friday, November 5, a total of 221 new cases were recorded from the 1,798 tests processed. A total of 233 recoveries were logged and 4 new deaths were recorded — three women and one man. Three of the persons were from the Belize District and the other from Cayo. All persons were unvaccinated.