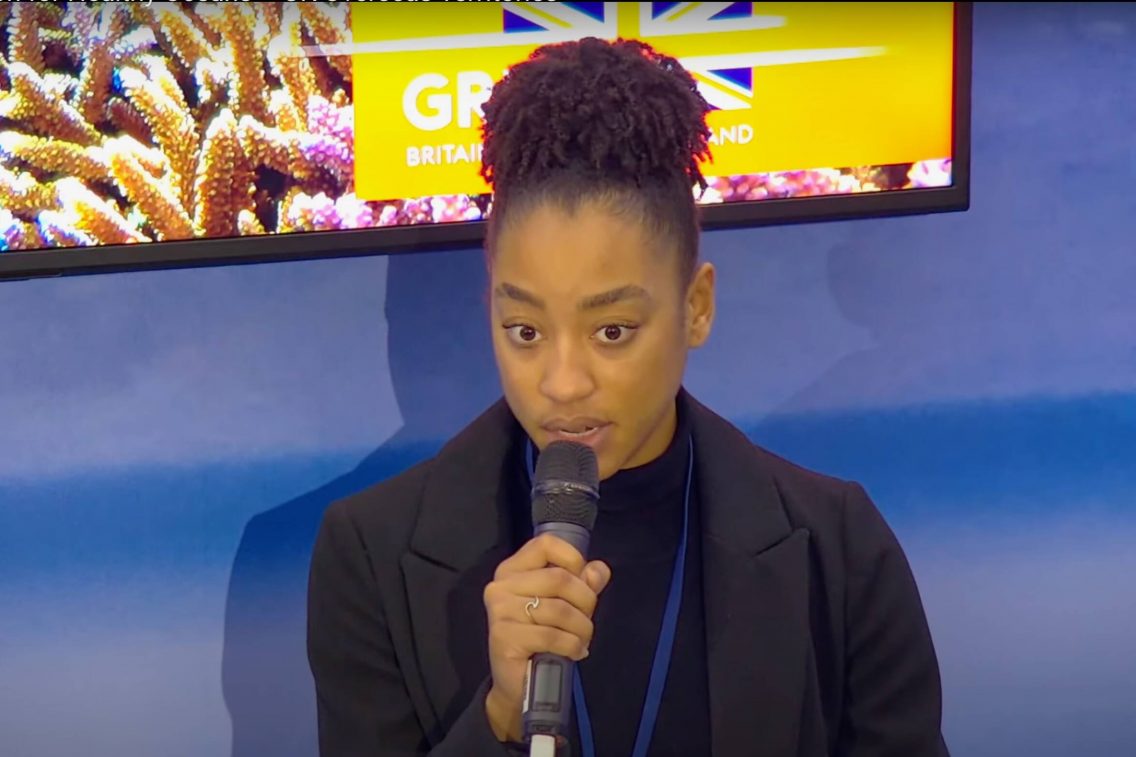 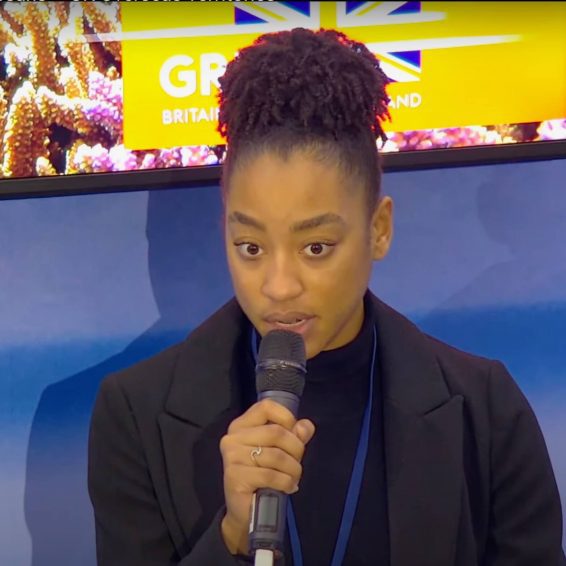 ‘Climate change can no longer be ignored’, Lyons urges at COP26

Caymanian Dejea Lyons, 18, called for more urgent action to address the impact of global warming, particularly on the world’s oceans, at the COP26 climate change conference in Glasgow on Saturday.

Lyons, who was selected as a student representative for the UK Overseas Territories, spoke alongside OT government ministers on an ‘Oceans Panel’ at the United Nations conference.

She said while the contribution of the UK overseas territories to climate change may be insignificant compared to the rest of the world, they are bearing the brunt of its impact, particularly on its oceans.

Predictions made a decade ago were now becoming a reality, she said, with shorelines receding, the spread of marine diseases, such as stony coral tissue loss disease, and the warming and acidification of the oceans.

“The issue of climate change can no longer be ignored or taken lightly,” she said.

Dejea Lyons, who was selected as a student representative for all the UK Overseas Territories, spoke alongside overseas territories government ministers on an ‘Oceans Panel’ at the United Nations conference.

“Since 2016, a huge amount has been done to protect that,” said George Eustice, UK secretary of state for the environment, noting various projects on heat stress to help manage the impacts of bleaching events on corals in the Indian Ocean; new marine protected areas around Pitcairn; and understanding the challenges around more frequent hurricanes and building resilience in Bermuda and the Caribbean.

Lyons, who is pursuing a degree in Global Development and Sustainability at Bath Spa University in the UK, outlined some of the measures taken by the Cayman Islands so far.

To mitigate climate change, Cayman had passed National Energy Policy that seeks to have 70% of Cayman’s energy needs coming from renewable sources by 2037.

“Furthermore, the government has assured us that the climate change policy that was drafted in 2011 will be updated and implemented soon,” she noted.

New regulations were also implemented to enhance the protection of about 50% of Cayman’s coastal shelf as marine parks.

More than 30 years ago, these marine parks were created around the three islands to protect coral reefs, as well as seagrass beds and mangrove wetlands, which are important for carbon sequestration and storage.

But Lyons noted, “Unfortunately, with excessive development, and constant growth of our population on the islands, many species are still in danger of removal. Especially our mangroves.”

To protect the mangroves further, she said, a species conservation plan was put into effect in 2020.

“Under the National Conservation Act, the primary mangrove conservation strategy is to bring vital mangrove ecosystems into the protected area system through the purchase of land and stricter regulations about their removal.”

But despite all these preventative measures, she said, “we face the issue of temperature rise, and all the harmful impacts that come with that for the future of the Cayman Islands”.

The challenge for citizens was to hold governments accountable to achieve what has been promised.

One such promise was the 2015 Paris Accord’s goal to limit the global average temperature rise to below 2C degrees and to aim for 1.5C degrees.

Lyons, who is involved with the youth advocacy and conservation group Protect Our Future, said the much-repeated phrase at COP26 of ‘1.5 to stay alive’ was sadly a reality.

“With a 1.5C degree rise in temperature, nine out of 10 coral reefs, which we as overseas territories rely on, will be at risk of severe degradation. And an increase in temperature above 1.5C will see the complete disappearance of these diverse ecosystems.”

“‘Sorry’ will no longer be enough,” the students’ representative said, addressing fellow panellists and the audience. “Our generation will have to bear the brunt of whatever you guys leave behind.”

In 2014, Cayman’s carbon emissions were estimated to be 12.4 tonnes per capita, a figure that would put Cayman solidly in the world’s top 20 countries today.

Panton said, Cayman would have to reduce its emissions as quickly as possible to have the credibility to demand that the rest of the world does its share.