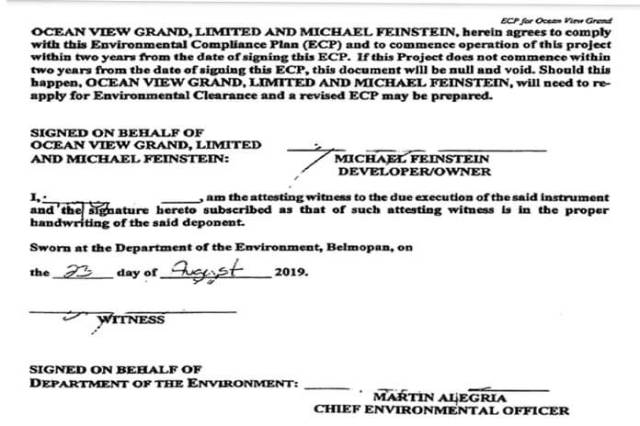 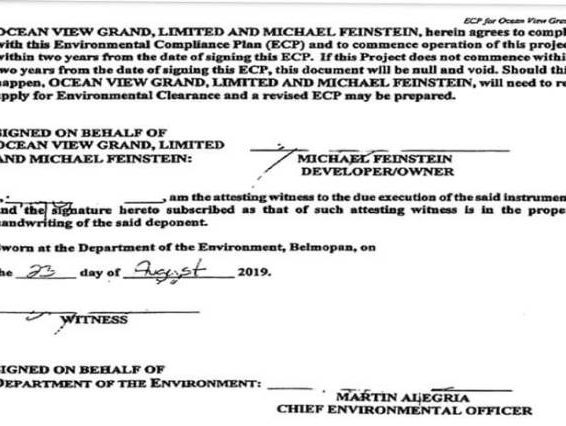 BELIZE CITY, Wed. Nov. 3, 2021 — This week, a leaked letter from the Ministry of Sustainable Development to the attorneys for Port of Magical Belize revealed that files related to Port Coral’s development of the cruise docking facility at Stake Bank were missing. The letter, in addition to condemning the breakdown in transparency, stated that a search would have to be done in the Department of Environment’s (DOE) library to locate those files. Interestingly, however, on the day after the public became aware that those files were missing, the 2019 ECP approving the development of both causeways was uploaded on the DOE’s website.

The letter revealing the disappearance of the files, which was most likely penned by the CEO in the Ministry of Sustainable Development, Kenrick Williams, states, “In discussion with Department, the Ministry was informed that the Stake Bank Cruise Docking Facility files seem to have been misplaced and cannot be found at this time.”

At this time, there has been no indication whether those files that have now surfaced are in fact the 2019 Environmental Compliance Plan (ECP) for Ocean View Grand Limited and Michael Feinstein’s residential and integrated tourism project on North Drowned Caye, or if even more files related to these mega-developments are missing.

This ECP was signed off on by Chief Environmental Officer Martin Alegria on August 23, 2019, for the development of 515 acres of land on North Drowned Caye, and the construction of an elevated causeway from the island to Belize City, and a causeway from North Drowned Caye to Stake Bank Caye, where Port Coral is set to be located.

While Port Coral is set to be the main docking port and will have world-class amenities of its own, the development of North Drowned Caye, which is set to take place in two phases, will also involve the construction of a number of facilities.

Phase one of those construction activities, for which clearance has been given, will include the building of a 17-acre staging facility at Mile 5 on the Western Highway, 2 hotels with a combined total of 160 keys, a 30-acre, 200-slip marina for a maximum of 200 vessels, a dry dock facility for approximately 200 boats, a boat fuel-dispensing facility, a commercial marina village with boutique shops, parking spaces spanning about 11 acres, restaurants, a casino/convention center, approximately 400 residential units contained within estate lots and condominium towers, a 26.5-acre inland watercourse, and finally a 2-lane elevated causeway that will be 11 feet above mean sea level and will extend from Belize City to North Drowned Caye (approximately 2.24 miles); and from North Drowned Caye to Stake Bank (approximately 3 miles).

The release of this information finally confirmed that the causeways were in fact approved under the UDP administration in 2019, but questions remain about whether some person or group within the DOE at the time acted unilaterally and without the directive of Cabinet.
It appears that this might be unlikely, given media reports stretching back over 4 years that indicate the presence of UDP officials at the signing off on this cruise port project and at a groundbreaking ceremony.

Those former UDP ministers, however, are insisting that they approved only the development of the Stake Bank Caye for the cruise port and that they refrained from issuing the go-ahead for construction of the causeway due to pushback from the environmentalist community. Their position is that the new ECP could not have been approved, since no public consultations were carried out on that matter. Chief Environmental Officer Alegria, however, when interviewed by local reporters last month, stated that the requirements for consultations were already previously met.

Phase two of the project being carried out by Ocean View Grand and Feinstein involves the construction of a hotel with a total of 100 keys, 381 residential units consisting of estate lots and condo towers, a 43.5-acre inland/interior waterway, 3 beach clubs, and 172 acres of reserves and carriageways.

The development on North Drowned Caye is intended to complement the Port Coral world-class cruise port. This island, which is primarily the habitat of mangroves and other marine plants, is set to be transformed as a part of the development of Port Coral, but under a different alias, albeit one controlled by the same principal.

According to the ECP, the developers have committed to maintaining a 66-ft buffer of mangroves where beaches or facilities won’t be erected to avoid any erosion — which is one of the potential environmental impacts pointed out in the ECP.

The document also points out the potential impact that the alteration to the marine ecosystem could have in the area, including the contamination of soils and marine habitats that could be brought on by dredging, land reclamation, and construction. Issues of disposal of soil and liquid waste have also been highlighted, along with the fuel and oil waste that will be generated by the increased boating activities.

A risk that wildlife in the area may also be threatened is considered in the ECP along with the changes that could occur in scenic areas, and the increased population and increased vehicular traffic in the developed area.

The ECP states, “The final designs and layouts of developments for the North Drowned Caye Development, and that of the proposed elevated causeway (both from Belize City to NDC and from NDC to Stake Bank) will be dependent upon the results of the geotechnical assessment above. As such, these details will need to be reviewed and approved by the respective authorities before construction can commence. In the case of building upon the Caye, it is the Central Building Authority, while for the elevated causeway it will be the Ministry of Works, with input from the Association of Professional Engineers.”

With the Briceno Cabinet’s review of the approval process for the project still ongoing, it will be seen if any of those bodies will take steps to prevent the causeway construction from going forward. It must be noted that Prime Minister John Briceno has stated that he does not believe that the success of the Port Coral project hinges on the construction of the causeways, which the investors and their supporters say is an instrumental part of the development, as it will eliminate any need of tendering to the mainland. We will continue to follow this story.